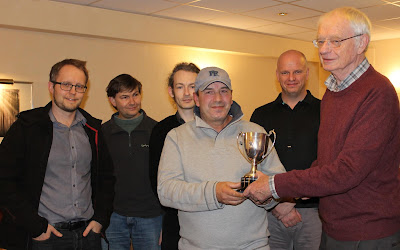 Petar is joined in this photograph by other new players (left to right: David Ellis, Dave Riley and Chris Badley) and team captain Steve Walley. All four will be playing for Rugby Chess Club teams, including Steve's during the 2018/19 season. All four new players show great promise and performed well in the contest.

Many thanks to all players who took part in the tournament and to Malcolm Harding (RCC Chair) for organising such an enjoyable event.
Posted by Chris Pegler at 22:58