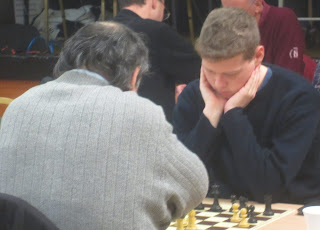 The competition attracted over 100 players (a wonderful target for the CDCL organisers to reach at the start of its 100th year).

High points for RCC  included a game against GM Mark Hebden by James pictured above. In terms of final results in the Open category Patrick won 4 games to finish 9th and win the u185 prize, slightly ahead of fellow Rugby A team players Simon Turner (11th with 3.5 points) and Paul Colburn (3 points). James finished 28th with 2 points (win and two draws) gained against much higher rated opponents.

We did not expect any of our players to be in the Major section (110-145 rated) but Petar Dimitrov found himself entered into this section in error and acquitted himself well, finishing 25th (2 points). As usual he was playing fast games - his win against his last opponent with 15 mins still on the clock.

Five players entered the Minor section, including junior Jonathan (Jonty) Male. For most this was their very first chess tournament. David Riley performed strongly - four wins (finishing 12th). John Hall also had a good day with 3.5 points (including 3 draws so only one game lost). Steve Walley and Chris Badley both won 2 points and Jonathan 1 point - with both Chris and Steve playing and winning against Jonathan there was an element of Good News: Bad News in some of these results.

Several of the our players are caught in action below.  An enjoyable contest. Congratulations to the league and many thanks to Hok Chui the organiser and others on the CDCL team who made this happen.  (Tournament results are at http://chess-results.com/tnr410734.aspx) 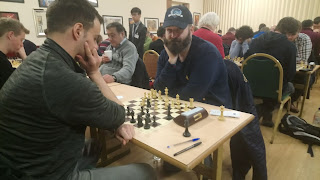 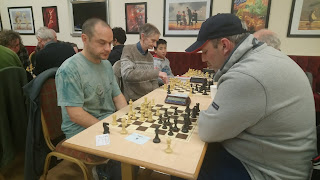 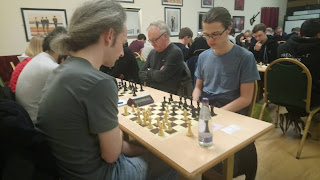 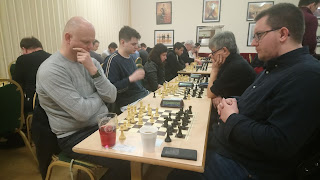