The first team won the cup v Nuneaton A !

Last week the first team won the Coventry league cup beating Nuneaton A 2.5 to 1.5 in the final. Jonathan, Nalin and Bob all drew and john Naylor won his game on top board against Andrew Patterson.

Although not very exciting here is Bobs game against John Collins. (But there was a good move by John at the end of the game).

Does anybody know how to get a diagram of a chess board on here? was hoping to put some games up as i have spare time but have forgotten how to do it!
Posted by John Naylor at 10:55

A thoroughly enjoyable evening, with the topics of conversation ranging from the latest trends in chess openings (see below the finishing touches being made to the Wildig-Cox defence!) to the politics behind playing the 2022 World Cup in Qatar. It was great to see everyone, and I think we can now recommend the Bengal curry house in Church Street for a great after-pub meal. 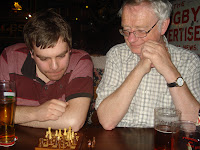 From Jim Macdonald news of a Leamington League event on 20th April.

The Blossomfield Club, The Wardens, Widney Lane, Solihull B91 3JY

Normal [Leamington] lightning rules apply. (Which for Leamington is ALL moves in 5 mins. Coventry is 10 sec moves). Thanks to Mike Johnson for pointing out.
Posted by Chris Pegler at 23:13

Well not exactly strangers (tho perhaps strange?). Two past (no longer playing) Warwick University webmasters have asked to be able to post to this blog and Bob and I (being generous sorts) have said Yes. As long as they are not too rowdy.

So Tyrannosaurus Chex is Joey Stewart and Michael Smith may be appearing in some guise shortly. Who he? He who said this about us on the WU chess site.

If anyone from Rugby CC wants another go at becoming a member of this blog - so that you too can write facetious comments about Nalin drop me an email. The more of you, the less work for me :-)

Chris
Posted by Chris Pegler at 21:00

Does anyone fancy the idea of celebrating the end of our (moderately!) successful season by going on an evening out? The plan is to meet up at The Merchants next Friday at 8pm and then after a couple of hours those that want to can go on for a curry. It'll be a good opportunity to meet up with everyone else in the club who we don't normally see because they're in another team.

Andrew
Posted by Andrew Turk at 14:11