Draws all around? Divisional Cup (Nuneaton vs Rugby) and Rugby D vs. Coventry G

The scores for the Divisional Cup games on 27 Sept have been posted to the CDCL site and were: 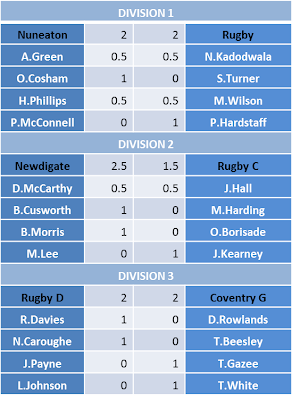 Which works out as a draw. More recently Rugby D in its first league game of the season also delivered a 2:2 match result with Nicola in her first league game compounding on her success in the Divisional Cup match with another win and Chris surprising Ravi Sian (and herself), with a win. Roy and Jim did not fare so well so Rugby D drew wuth Coventry G on this occasion with the efforts from the women of Rugby came in real handy. (Yes, more than one female player now - take note!)

Any news from the other teams? Phill has posted for Rugby C (some excellent reports). Would be nice to see some others too. And perhaps even some games?
Posted by Chris Pegler at 14:47