Well Rugby D have all the gadgets :-) - which is just as well because Chris needs something to occupy her when she once again crashes and burns. But I thought that I would give you a snapshot of the action as it happens. Vs. University D Chris loses to a canny player Cerden Micher on board 3, following Joe Oswell's convincing win against David Noyvert.

Things are looking promising on Board 1 for Jim MacDonald against female player Mary Kairatkyzy (yes, yet more female players in the league now). Roy Talbot vs Jose Garcia looks like a close match but Jose has just refused a draw so its not _that_ close. Another match with everything to play for from Team D. Trying to load a sneaky picture of men at work ... no flash so as not to interrupt play. 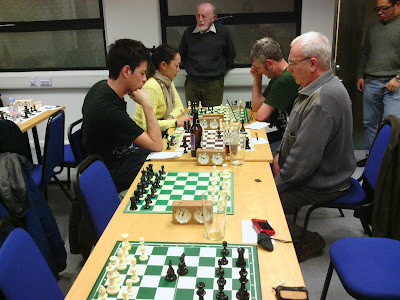 Meanwhile the B team after one game (Martin Wilson vs. A Rysbagen) are still hard at play. Fingers crossed for everyone.

PS. Joe and Roy can recommend the local brew Duck Soup Ale, only brewed exclusively for the Warwick  Student Union.
Posted by Chris Pegler at 21:35